The Non-Alcoholic Beer Market is Bubbling Up

Beer sales are flat, except for the non-alcoholic variety

With the rise of the “sober-curious” movement, non-alcoholic beer is poised to grow at 8% over the next 5 years, with industry heavyweights and independents investing heavily in the space.

Sales of non-alcoholic beer have climbed 90% over the last decade, significantly outpacing the growth of the broader beer market. And with about half of Americans wanting to decrease their alcohol consumption for wellness reasons and Middle East consumers searching for new beverages in countries with strict alcohol laws, the trend is expected to continue.

In fact, by 2024, the global non-alcoholic beer market is poised to surpass $25B, with 8% annual growth. Traditional beer sales are only expected to climb by 1.8%. 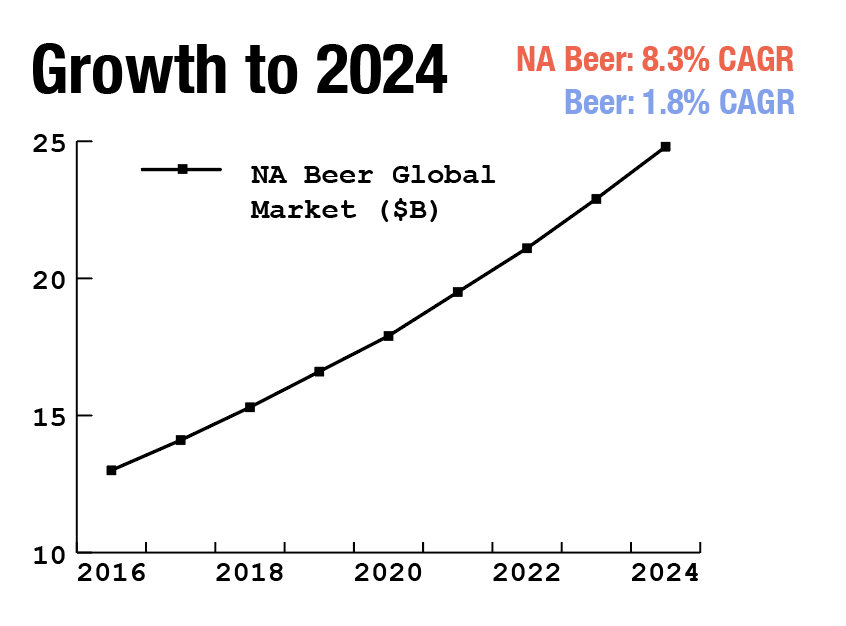 With interest in the non-alcoholic segment picking up, incumbents and independents want in on the action. Last year was Heineken’s best year in a decade, partially due to its recent introduction and expansion of Heineken 0.0––which is “just flying,” according to the company’s Chief US Marketing Officer. In fact, Heineken sold 13.1M hectoliters of low/non-alcoholic beer last year––more than 500 Olympic-size swimming pools of non-alcoholic suds.

Heineken 0.0’s penetration in new markets is promising, with sales already contributing to 5% of Heineken’s UK portfolio, and even more impressively, 7% in Spain and 20% in Russia. After introducing the brand in the United States earlier this year, Heineken is hoping non-alcoholic beer will make up 5% of its U.S. portfolio by 2023. That would be an astonishing rise, considering Heineken didn’t sell its non-alcoholic product in the U.S. until this January.

Early signs are good, with Heineken’s earnings through the first six months of the year up 10% in the low to non-alcoholic beer segment, despite disappointing overall earnings. Carlsberg saw similar increases, with volumes growing 33% in Western Europe following the introduction of non-alcoholic lines.

Heineken and Carlsberg are not the only giants that see big opportunity. ABInBev––the world’s largest beer conglomerate––has set its goal is for low/NA brands to make up 20% of its global volume by 2025 (they’re currently at 8%). That’s a lot more than 500 Olympic swimming pools. To jump-start this process, ABInBev added 12 new products last year alone to its already sizeable 76 low/non-alcoholic brands worldwide. 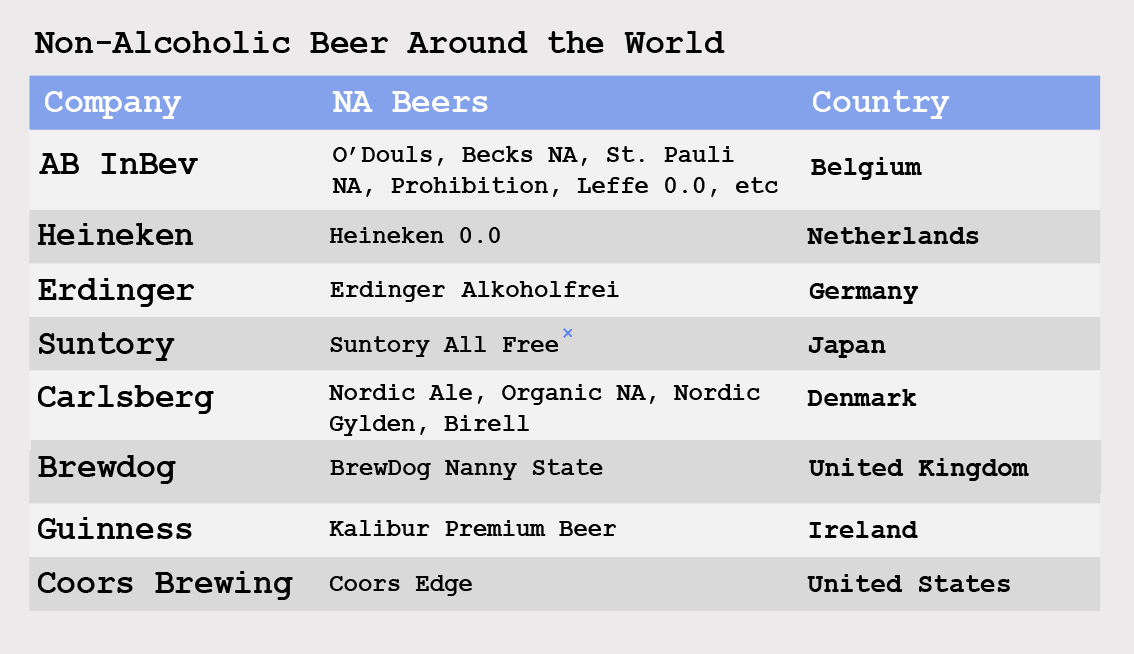 You know the signal is strong when the FAANG of beer––CHAB (Carlsberg, Heineken, and ABInBev)––are all diving headfirst into the market.

The rise of the independents

There’s also been a surge of much smaller companies, including craft breweries, angling for a corner of the market. This includes Athletic Brewing (raised $750k), Devil’s Foot Beverage (raised $300k), Sobah Beverages, and Nirvana Brewery, among many other independents.

North America and Europe dominate the non-alcoholic beer market, but there are emerging opportunities in many other areas––in particular, Asia-Pacific, the Middle East, and Latin America.

Economic growth in countries like China, India, and South Korea should contribute to strong growth in the region. In fact, the segment in India is expected to have a CAGR of 9%, after Budweiser 0.0 and Heineken 0.0 were recently introduced there. China is also capitalizing on the trend, with 29% of all beers launched in 2016 falling into the low/no-alcohol segment.

Europe continues to be a stronghold: with low and non-alcoholic beer launches contributing to 12% of launches in Spain, 11% in Germany, and 9% in Poland. Analysts see even bigger opportunities in the Middle East and Africa, which came in at a whopping 30%. 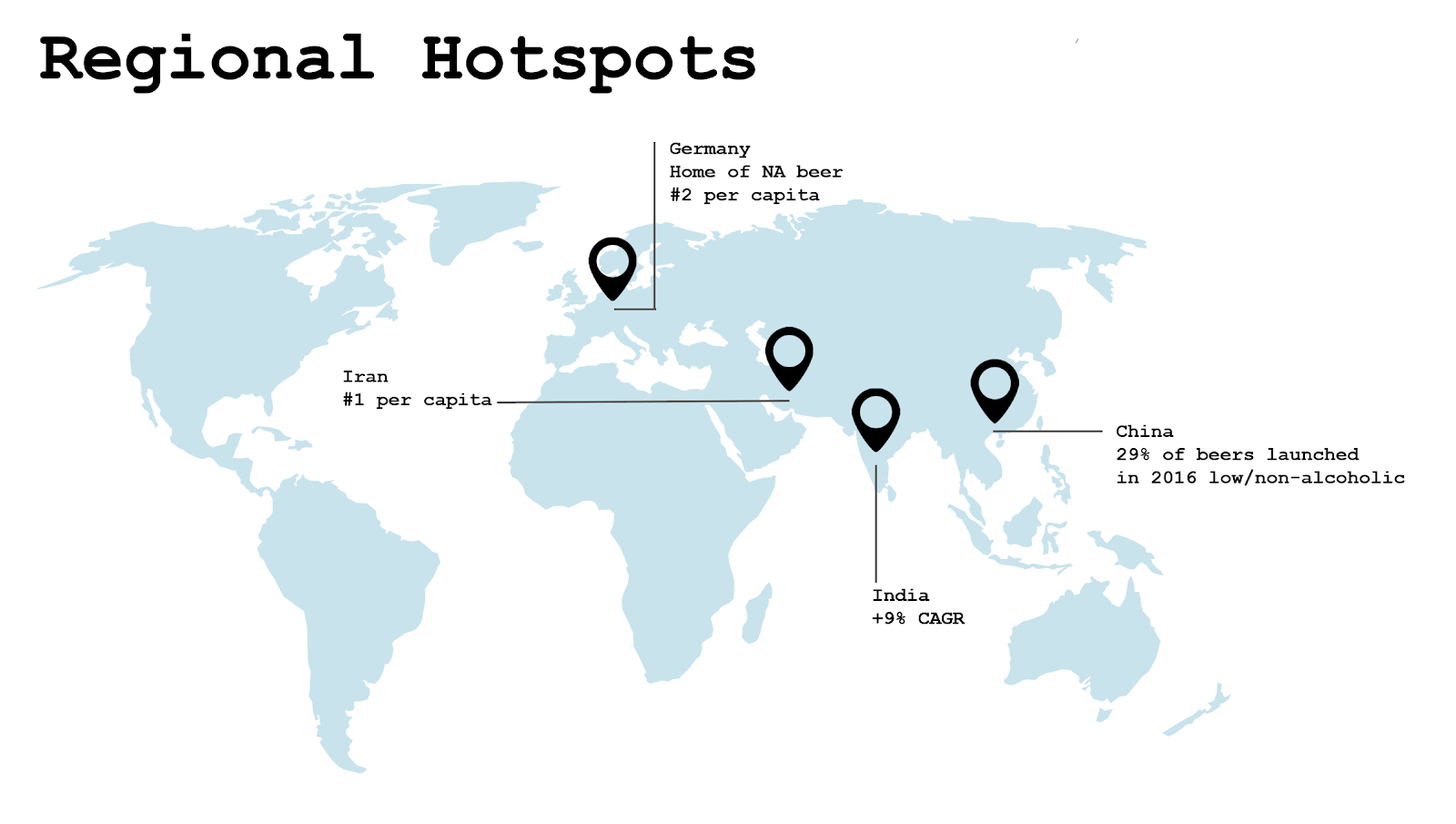 This rapid growth in the Middle East shouldn’t come as a surprise. After banning alcohol in 1979, the market for a legal alternative has flourished. The Middle East accounts for almost a third of the entire global market, due to large contributions from Iran, Saudi Arabia, and Egypt––all of which have strict alcohol consumption laws.

In these regions, non-alcoholic beer is often disguised as malts ranging in flavor from peach to vanilla to coffee. The strict nature of alcohol laws in these countries also spurs innovation. One brand called Fayrouz––founded by the businessman who owned Triple Crown winner American Pharoah––created the world’s first Halal beer, using a brewing technique that ensures the malt never fermenting and therefore, alcohol never being produced.

What’s behind the spike in sales?

Some say the increase in non-alcoholic beer sales is a natural extension of the wellness revolution, with more people looking to shave calories or even improve their post-workout recovery.

But many people are just drinking less, sometimes spurred by social campaigns. The silent grassroots movement of the “sober curious” recently exploded on Google, in response to Dry January and Sober October campaigns, which cumulatively receive almost 50,000 searches monthly.

As many as 40% of global customers say they want to decrease their alcohol consumption for health reasons, according to a recent Vox report. Another report says over half of Americans want to do the same.

Non-alcoholic beverages also offer an opportunity for beer companies to tap into a sizeable audience completely foreign to them: those who don’t drink at all. The National Institute of Alcohol Abuse cites this segment as non-trivial, at about 30% of Americans 18 or older who hadn’t drank in the last year. We’re also seeing more people quit drinking, like Twitch co-founder, Justin Kan, who recently said he was giving up alcohol permanently and built a Telegram group of over 1,500 like-minded individuals.

Athletic Brewing’s co-founder communicates this opportunity by noting that his company is looking to “tap into the 30% of drinking occasions that are being lost to people who do not drink alcohol.”

In addition to the potentially toxic effect of alcohol on your life, people are locking eyes on healthier options overall. In fact, one in five low or no-alcohol products sold is actually replacing a soft drink.

With alcohol hosting more calories per gram than carbohydrates (7 vs. 4), these lower-alcohol beverages are offering people a lighter option. For example, Heineken 0.0 clocks in at 69 calories, as opposed to the original Heineken beer at 150, and is a fraction of heavier beers that reach up to 400 calories (more than a medium fries at McDonalds).

Some Japanese beers take it a step further, like the Kirin Perfect Free, which sports a total of zero carbs and is infused with water-soluble dietary fibers that improve digestion. To top off the caloric advantage, non-alcoholic beer has even been shown to reduce inflammation and respiratory tract illness.

Purveyors of non-alcoholic beer have not only found a way to target people watching their waistline, but also their wallets. Non-alcoholic beers aren’t taxed as much, and retailers don’t need a liquor license to sell them. That helps lower their price.

With large swaths of the population ready for a less boozy future, it begs the question: how can you get involved?

The good news: Beer companies are complex and require support across a range of functions, including recipe creation, ingredient sourcing, sales, marketing, distribution, and quality control. The growth of this relatively new market brings opportunity for innovation at every one of these steps. 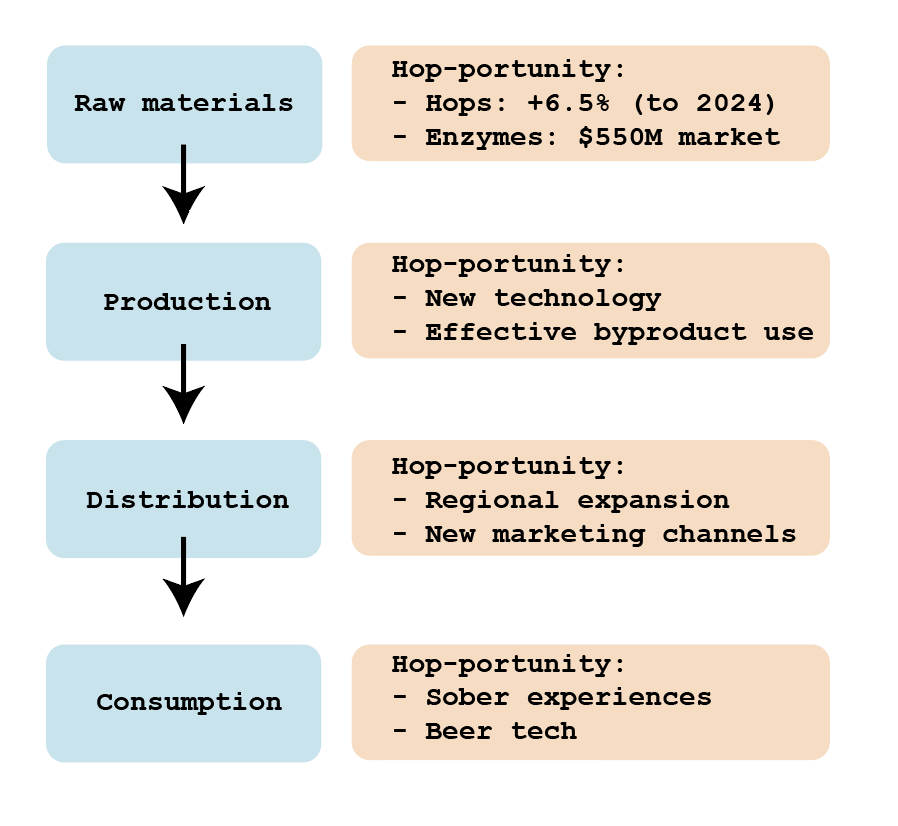 As more non-alcoholic beer is produced, the demand for raw materials will naturally also increase. This includes hops, which are projected to grow at 6.5% through 2024––but also the enzymes that play a critical role in processing and fermenting beer.

Perhaps an even greater opportunity exists in the byproducts––namely, the grain that is created every time beer (alcoholic or non-alcoholic) is produced. Companies like Regrained (which raised $2.5M) are taking these already highly nutritious byproducts and upcycling them into edible energy bars.

The production process overall offers much room for innovation. Reverse osmosis, one of the few techniques available to process non-alcoholic beer, is expected to grow by 7% yearly. Optimizing existing techniques will be just as important as the invention of new technology, like the Fayrouz’s process, which never ferments the malt in the first place.

Beyond production, many companies will need to think about opportunities for expansion, both regarding how and where. A deep understanding of the root drivers of this “revolution” enable us to target specific markets. For example, there may be opportunity in Indonesia––a country with a large population, one of which is significantly Muslim.

Smart marketers can capitalize by creating personas of people likely to embrace non-alcoholic beer––consumers like Healthy Heather and Budget Brody, to whom they can directly market their products. These new brands may come from incumbents, but more likely we will see these niche brands come in a wave of independents, akin to the rise of microbreweries over the last decade.

Naturally, low to non-alcoholic products are less restricted and therefore can be sold not just in bars and liquor stores, but also in convenience stores, fast food joints, supermarkets, and just about anywhere that currently sells bottled water––including online, which is a huge opportunity on its own.

In fact, many NA drinks have set their sights on alternative points of sale, like gyms and health food stores. This targeting is not as counterintuitive as it seems; Johannes Scherr, doctor for the Germany Olympic ski team, says most of the team trains alongside non-alcoholic beer, and it is often handed out at the finish line of major German marathons. This is intentional, as athletes are increasingly choosing non-alcoholic beer for its lower caloric impact, but also research concluding booze-free drinks provide other health benefits. That’s why gyms are opening their arms to this trend, including McFit Fitness (Germany), which is one of the many places where you can find Heineken 0.0.

Finally, the world of consumption presents perhaps the most diverse array of opportunity. Entirely new experiences can be crafted around social interaction without the hangover. For example, sober bars like Brooklyn’s Getaway or Manhattan’s Listen Bar enable people to connect “beyond alcohol.” (We profile another––the Texas-based Sans Bar, whose founder has big plans to expand––in this article).

Experiences around these drinks naturally have less limitation due to the lack of physical impairment. Workout and beer? Why not!

Seedlip, a company that considers itself foremost a nature company, utilizes plants to create non-alcoholic adult drinks. The founders crafted a new experience around their product by building an experimental garden at their farm. Oh yeah, and they’re funded by Diageo––one of the world’s largest alcohol companies.

As people ride the non-alcoholic wave, entire communities can be created around brands that differentiate. For example, JoyBrau created a vegan, non-alcoholic protein beer targeted specifically at fitness folk. The beer has 21g of protein, 10g of amino acids, among other fat burning ingredients like L-carnitine. Other companies have instead focused on gluten-free beer, cannabis beer, and a whole host of niche non-alcoholic spirits like Kin Euphorics and Three Spirit.

The growing global (and unrestricted) market for non-alcoholic brews is intoxicating in all the right ways and compelling enough to make a “sober-curious” entrepreneur feel “sober-confident.”

Market for Meat Substitutes Heats Up