Market for Meat Substitutes Heats Up

Over the past 9 years, the plant-based food industry has quadrupled—and it’s only getting bigger. 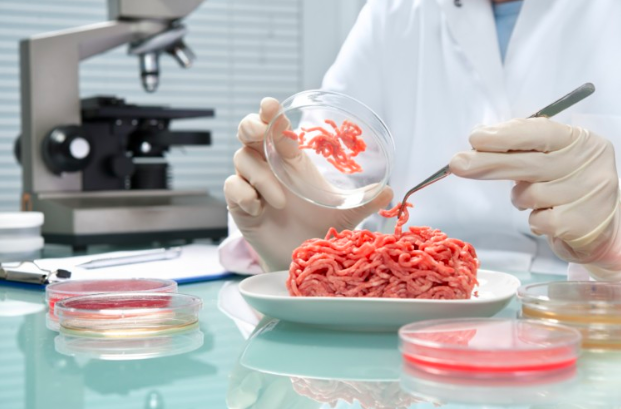 25% of Americans between the ages of 25 and 34 now identify as vegan or vegetarian. This increase in demand led sales of vegan foods from January to June 2018 to rise 10x faster than other foods, reaching $3.1B in the US in 2018.

There’s heavily funded competition from Beyond Meat and Impossible Foods, worth $3.8B and $2B, respectively. But there’s a huge gap in consultation and educational services for plant-based products.

I was equally curious and horrified when I saw the first ad for a bleeding veggie burger. It was 2017, and Impossible Foods was starting to gain traction for its meatless meat patty that promised to bleed and sear like any of your favorite burgers.

I’m not a vegetarian by any means; when I think of veggie patties, I think of sad, pale, thin-looking “burgers” that polite barbecue hosts cook for their vegetarian guests. Still, when I saw that picture of a juicy, decadent-looking burger with the words “meatless” in the caption, I knew that it was going to be a game-changer.

According to The Economist, 25% of Americans between the ages of 25 and 34 now identify as vegan or vegetarian. And, as per usual, the money followed millennials: This increase in demand led sales of vegan foods from January to June 2018 to rise 10x faster than other foods, reaching $3.1B in the US in 2018.

But, unlike health trends like activated charcoal or asparagus water, meat substitutes aren’t a flash in the pan. Plant-based meat alternatives have actually existed for centuries: Veggie protein substitutes like tofu date all the way back to 9th century China, and the first commercial peanut-based meat substitute was actually launched in 1896 by the Kellogg brothers—yes, the very same brothers that brought you Corn Pops.

And, while meatless meat is not necessarily new, it’s been pushed more into the mainstream over recent years thanks to savvy marketing and science that enables plant-based compounds to mimic the flavor and texture of meat. Want to ride the plant-based meat wave? There’s no better time to get involved than now.

A 2018 report by the Good Food Institute cites that 228 unique investors have poured over $17B into plant-based startups since 2009, most of it in the last two years.

The spike in demand and public interest has even pressured huge meat vendors to get skin in the game: Tyson Foods, the world’s second-largest meat distributor, had a 5% stake in Beyond Meat in 2016 and contributed to the company’s $55m Series G funding round in 2017 before selling their shares to produce their own plant-based product line.

Data via the Good Food Institute

But, veggie burgers have been available in most frozen food aisles for a few decades—so, what’s changed?

Why is everyone biting now?

In short, proper marketing. Veggie meat substitutes have traditionally been targeted to vegetarians and vegans, with exclusive language like “meatless,” “vegan,” and “vegetarian” that deterred meat-lovers.

“The problem with plant-based meats in the past is that they’ve been framed more about what’s missing,” says Daniel Vennard, director of the educational Better Buying Lab (a division of the World Resources Institute). “They haven’t really been marketed in a way that maximizes their appeal for the majority of consumers.” 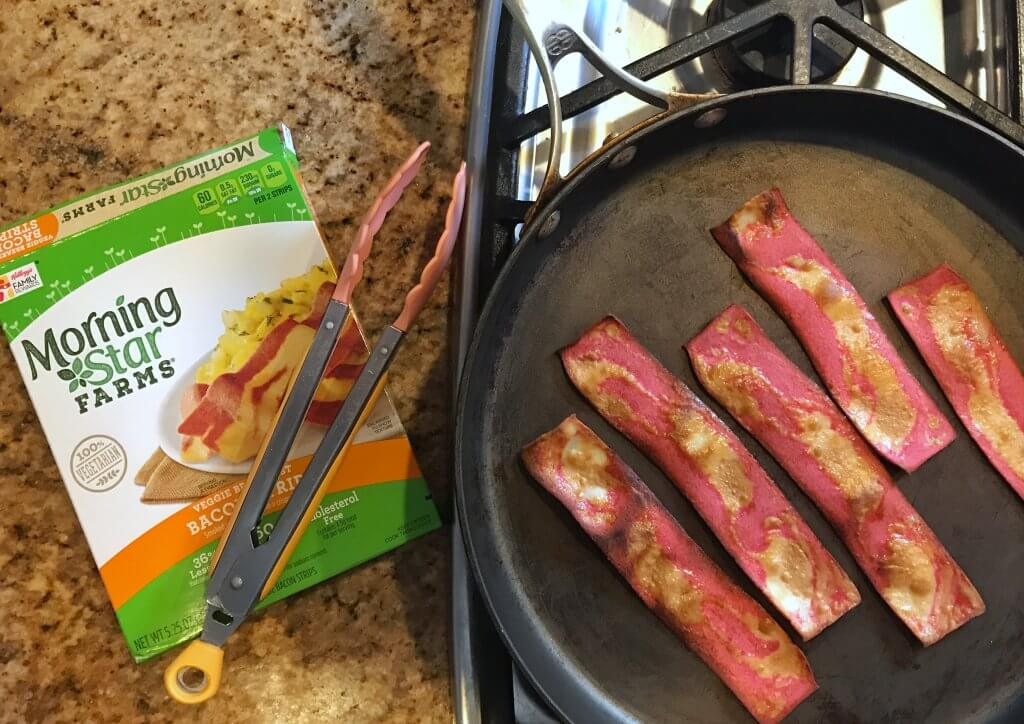 The lab’s collaboration with Panera Bread to test various names for one of their healthier black bean soups illustrates how valuable positioning can be: Rather than focusing on what it lacks, a la the original name, “Low-Fat Vegetarian Black Bean Soup,” they tested two other names at various US locations: “Slow Simmered Black Bean Soup” and “Cuban Black Bean Soup”—the latter sparked a 13% surge in sales.

New brands like Beyond Meat and Impossible Foods focus their marketing entirely on superior taste and cooking experience, using descriptive language and imagery to their advantage by advertising how their products taste just like meat—even down to the appearance of “bleeding.”

Partnerships with big restaurant chains have also been key to bringing veggie meat to the masses: 15k restaurants now offer Beyond Meat on their menus, including chains like TGI Fridays, Del Taco, Carl’s Jr., and Canada’s A&W. Impossible Foods also inked a recent partnership with Burger King to launch the Impossible Whopper, adding to its list of 5k restaurant partners worldwide.

New burgers on the block

Bill Gates-backed Beyond Meat was largely responsible for this huge rise in popularity and demand. Launched by Ethan Brown in 2009, this LA-based alternative meat startup first began selling mock chicken products in Whole Foods in 2013 and developed its pea-protein based beef product in 2014.

Just five years later, the company made history with its May 2019 IPO as shares tripled on the first day of trading—one of the biggest IPO surges since the 2008 economic crisis. Beyond Meat now has a valuation just shy of $3.8B, after raising nearly $241m. 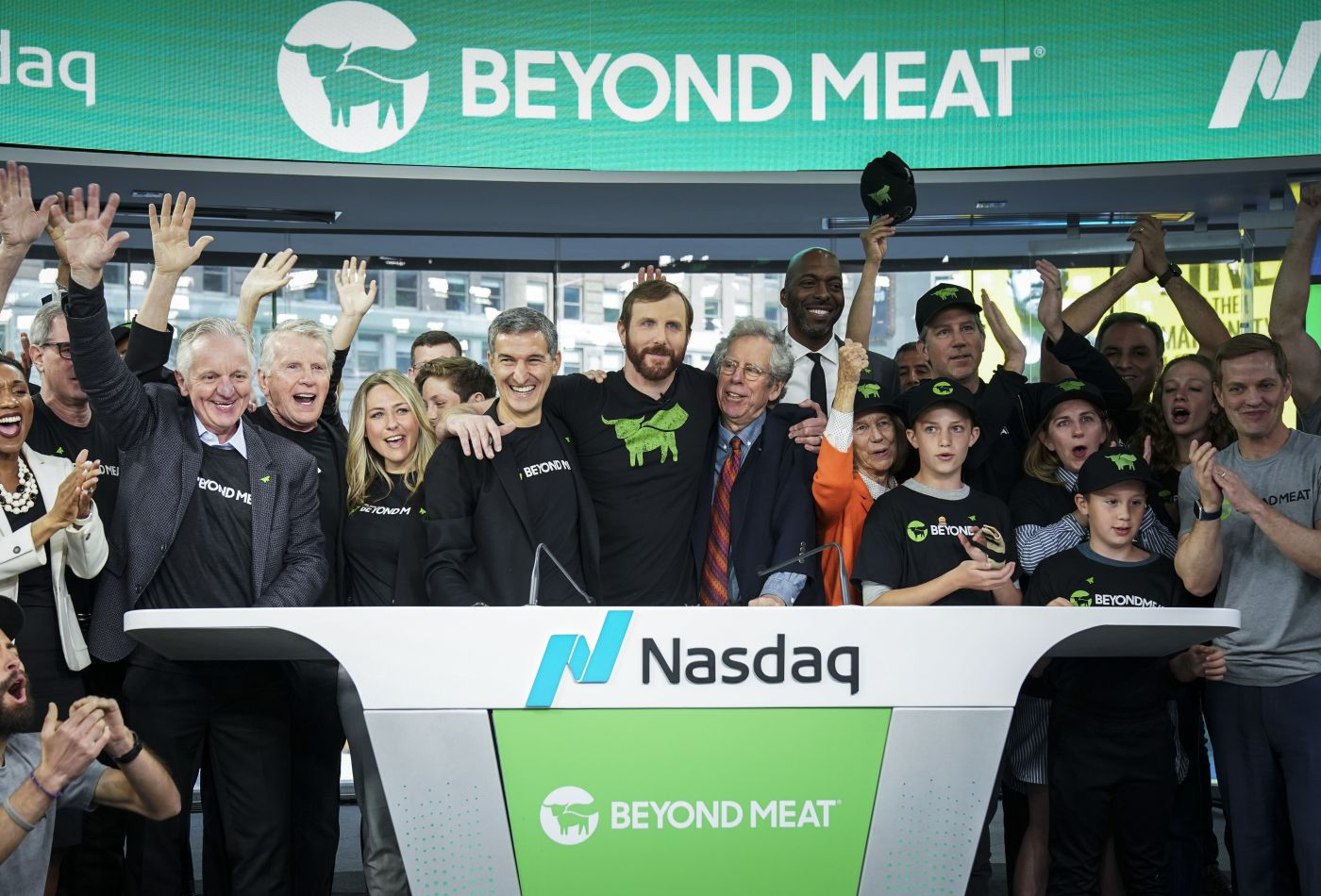 Beyond Meat CEO Ethan Brown at the company’s IPO.

Alongside Beyond Meat, 8-year-old California competitor Impossible Foods is said to be worth around $2B following a successful fundraising haul. And of course, let’s not forget the old grocery store standbys, Kellogg’s MorningStar Farms and Maple Leaf Foods’ Field Roast Grain Meat Co.

MorningStar’s an oldie but a goodie that was founded in 1974 and is set to produce $10m in revenue this year. They’re known for their wide array of plant-based products including sausage patties, burgers, and bacon. Field Roast was launched in 1997 and racked up $101.3m in net earnings last year after being acquired by Maple Leaf for $140m in 2017.

The success of these companies has sparked a trail of both big and small companies jumping onto the bandwagon, including most recently Nestle’s Sweet Earth Brand, which plans to launch its own “Awesome Burger” in fall 2019.

Now that we know what the big players in the plant-based space are doing, let’s look at what they’re not…

In the midst of a gold rush, start making shovels

You don’t have to be a molecular biologist to get in on the plant-based boom. You just have to dig yourself a niche and go where the money is — specifically, big food companies.

In this new mass market for plant-based products, there is still a huge gap in consultation and educational services for marketing and business development. Vennard emphasized that a lot of big food brands need guidance on how to properly market and develop their products to stand apart from the sea of plant-based meats.

Take kale, the one-time sad excuse for lettuce that, for decades, was used as a garnish: After a swift shift in branding in the 2010s, it became the trendiest vegetable on the market, with Whole Foods selling 22k bunches of it daily.

Along with product development and marketing, Vennard said there’s a huge demand for lifestyle brand-building to introduce consumers to new types of meals, ingredients, recipes, and cooking methods that showcase their star ingredient. 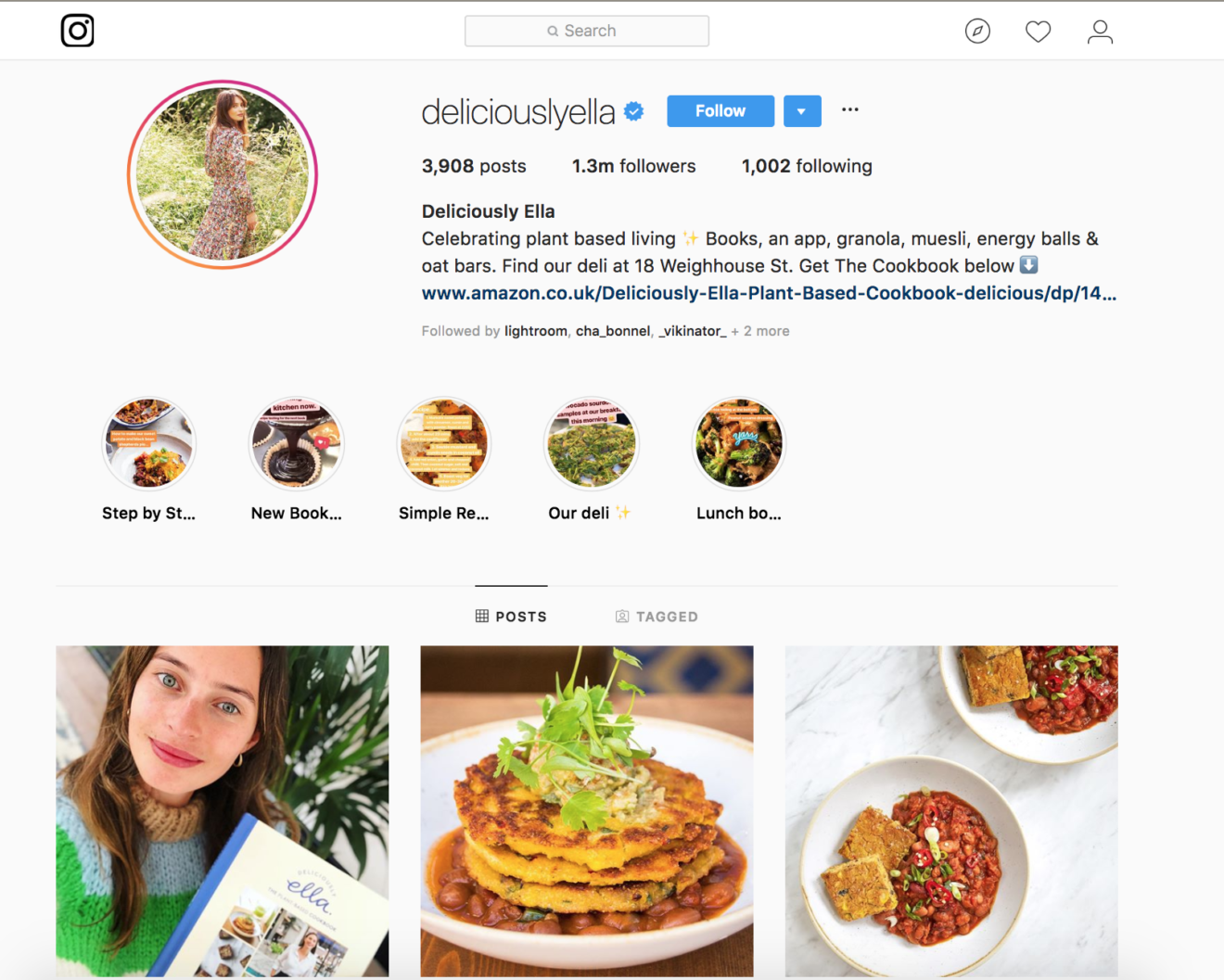 Plant-based influencer Ella Woodward has used her marketing savvy to launch a cookbook, podcast, and her own line of branded granolas.

Think outside the bun

Plant-based meat has come a long way, but a common complaint from vegans and lactose-intolerant consumers alike is that cheese substitutes still have a long way to go.

“The meat is really on point for me, but the cheese is really lacking,” says Annie Arnone, a Toronto-based journalist who follows a vegan diet. Her main complaint is that the prices are too inaccessible.

Life-long vegetarian Megan MacLean said the main thing stopping her from being a vegan is her love of cheese. “I like the alternative milk, and I’ve had some alternative yogurts and ice cream, but the cheese isn’t quite there yet.”

All this to say, there’s a huge opportunity to produce a cheese product that can actually give traditional dairy a run for its money at an affordable price. And, though none of the big players have broken into Big Cheese yet, it’s only a matter of time: Impossible Foods’ CFO David Lee announced in May that a big chunk of the company’s $300m Series E funding will be put toward researching and developing their own dairy platform.

For consumers who really don’t want to let go of their beef, but are also aware of the health and environmental effects of meat production and consumption, cultured meat is a very interesting and futuristic alternative.

What’s the difference between plant-based and “lab-grown”? Lab-grown is the process of producing meat in a lab through the use of real animal cells, which eliminates the need to farm and slaughter animals. The market raised approximately $50m in capital investment in 2018 and has a lot of room to grow through aid in funding and research.

California-based Memphis Meats is one food technology company aiming to grow sustainable “cultured meat.” With $20m in funding, it’s still in the experimental and research phase, but aims to launch publicly in 2021. 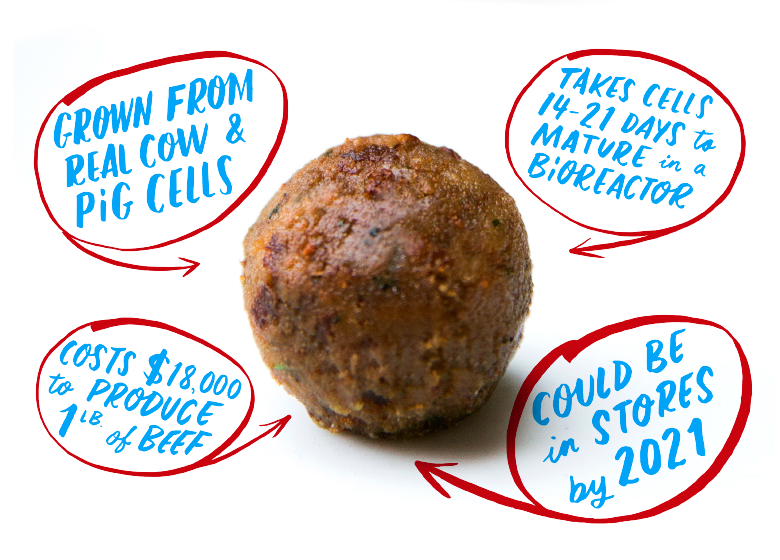 A “cultured meatball” from Memphis Meats.

It pays to solve a public health issue

This isn’t just a trendy cause for marketers to get behind, it’s trendy for lawmakers too. New legislation and tax breaks incentivizing green companies will soon be a huge driver of momentum for plant-based startups.

Climate-focused laws and regulations like the Clean Water Act, the Clean Air Act, and the proposed Green New Deal all pose higher taxes for businesses and industries with large carbon footprints, while some include government subsidies and grants for environmentally sustainable businesses.

While these policies help keep most corporations in line when it comes to maintaining ethical and sustainable production practices, not tainting their reputation is often their biggest motivator: Increasing awareness of the meat industry’s environmental impact adds pressure on producers to fund new plant-based products and Vennard argues that climate change is an increasingly popular industry for investors, celebrities, and political figures to put their money behind.

In terms of private funding, there are plenty of VCs and investment firms that focus specifically on “green” startups, like Breakthrough Energy Ventures (a $1B fund started by Bill Gates) or Swell (an ethical investing platform).

But, public funding is an alternate funding route for green startups: Grants like the Conservation Fund’s Green Business Grant are awarded to early-stage for-profit and nonprofit businesses alike (you can search other environmental grants through the Small Business Association here).

Whether they do it for PR or for the planet, big corporations and investors are pouring money into plant-based protein—and that’s a win for the environment and entrepreneurs.

Cold Brew Office Kegs Are the Future of Coffee

The Non-Alcoholic Beer Market is Bubbling Up