Cold Brew Office Kegs Are the Future of Coffee

The office is the daytime version of a bar, and cold brew is the drink of choice

RISE Brewing Co.’s first client, in spring 2015, was a Brooklyn restaurant called Colonie. Co-founders Grant Gyesky and Jarrett McGovern provided a keg for the weekend brunchers the same way a brewery would with craft beer. Their frothy concoction looked similar to a stout, too: Poured into a glass, RISE’s drink foamed at the top.

It was cold brew infused with nitro. The bar’s patrons quickly downed the drink, and one of them asked if RISE could supply a keg at her office. Four years later, in addition to a successful line of coffees sold at retailers in cans, RISE provides cold brew kegs to roughly 1k clients, including the New York Yankees and several Major League Baseball teams.

RISE is joined by Joyride, which introduced the practice of providing kegs at offices. They represent two major trends in the coffee market: cold brew and office sales. Though kegs have been around Silicon Valley offices for a few years, other locations around the country are realizing the need to feature quality coffee at the workspace in a keg, rather than Folgers brewed from a pot.

Gyesky expects office kegs to be the fastest-growing part of his business.

“There are a lot of offices, and people drink as much coffee as they do beer and water.” Gyesky says. “The equivalent of the bar or restaurant during the day is an office.”

Coffee sales as a whole have been growing steadily––at a 3-to-4% clip, according to the market research company Packaged Facts––with cold brew expanding more rapidly. This year, David Smith, founder of Austin-based High Brew, the top selling independent cold brew brand, expects total sales of cold brew to reach $150m, up from about $90m last year, $40m in 2017 and low single digits in 2012. The market is expected to grow at a 25% compound annual growth rate in the coming years.

Cold brew is the fastest-growing segment of the larger $3B ready-to-drink coffee industry. 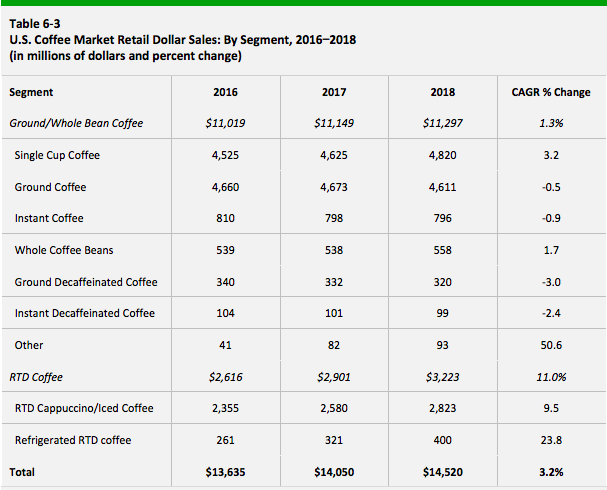 Sales for “other” primarily include cold brew. Source: Packaged Facts.

Cold brew’s roots trace back to the 17th century in Japan, but it needed a 2015 Starbucks rollout to reach the mainstream (Starbucks expects half of its beverage selections will be cold by 2021, compared to 35% in 2016).

Cold brew differs from regular coffee because it is made by steeping coffee grounds in cold or room temperature water for between 12 and 24 hours. The texture is smoother and it is less bitter and acidic than regular coffee. It also has more caffeine. People favor cold brew as much for the taste as the qualities that jibe with 21st-century lifestyles: More caffeine means a greater opportunity to stay focused for work. The quality of the beverage stays intact in a can or bottle. And, not insignificantly, the swirly froth looks great on Instagram.

RISE started with about $50k of the co-founders’ own money and has received two rounds of funding (Gyesky declined to specify the amount but Crunchbase estimates its total funding at $5m). The company has about 25 employees.

Venture capitalists invested more than $600m in coffee companies in 2018, many of which specialize in cold brew, according to CB Insights. Dave Asprey’s butter-blended Bulletproof coffee raised $40m, and High Brew raised $20m. Although five major companies control most of the market, including Nestle, JAB Holdings and Starbucks/PepsiCo, they are buying successful startups. Nestle, for instance, purchased a majority stake in Blue Bottle for $425m and Chameleon Cold Brew in 2017 for an undisclosed amount.

Opportunities around the keg life

Joyride started out as a truck in New York City. When workers stopped by for their caffeine fix, they said they wished the truck would be in the same place every day. Joyride’s founders realized they could serve coffee to more workers if their product was in the office. In 2011, the company started with a handful of businesses and grew slowly. The last five years, the number of offices wanting cold brew kegs and specialty coffee (Joyride also offers kombucha and tea on tap) has picked up substantially. Joyride has thousands of clients and about 120 employees.

RISE has some 1,000 clients, and there are many other competitors. But the market is not saturated. Offices that have embraced coffee kegs have typically been in tech, finance, and media and located on the coasts. The lack of adoption nationwide is not for lack of demand. Joyride routinely hears from offices in the Midwest and occasionally from more far-flung locations.

“We’ve had some people write in from London and Toronto and Korea,” says Paul Toscano, Joyride’s chief strategic partnership officer. “That’s not very often but that’s happened. I think it’s something that’s become more and more of a movement.” 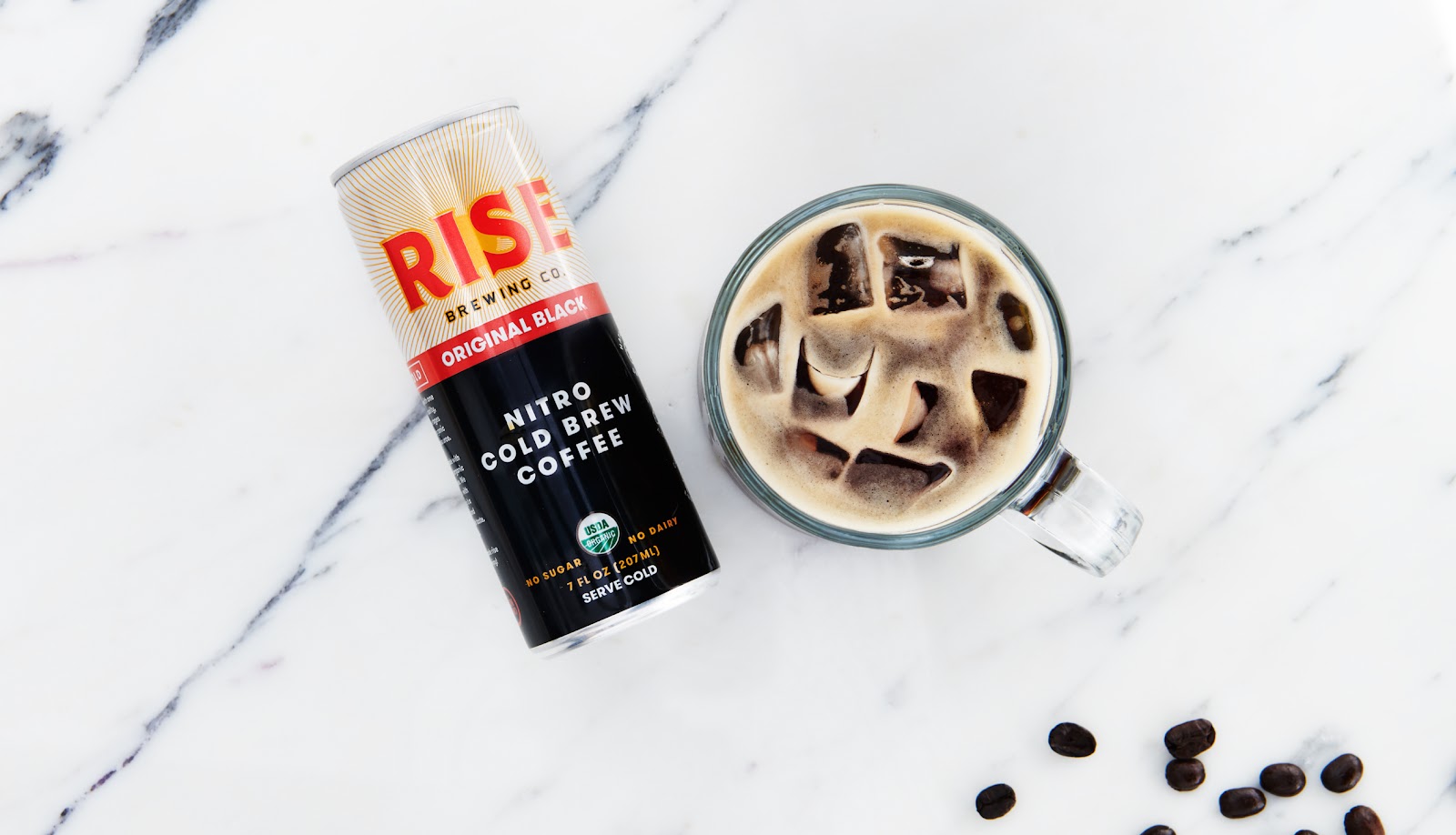 The economics of coffee kegs

Kegs work as a cost-savings tool for consumers and produce high profit margins for coffee makers. Depending on the market, Joyride’s 5-gallon cold brew kegs cost an office about $150. The company declined to discuss its profit margins, but the wholesale coffee company Speedwell estimates the cost of producing a keg of cold brew at $50. At $150 per 5-gallon keg, a 12 oz. serving would cost an office about $3. That’s less than the $5 a similar drink would cost at a coffee shop. Plus, Joyride has found offices avoid up to 85 pounds of plastic and paper waste per year when they use kegs.

Demand for office kegs has been driven by media coverage––Good Morning America has featured Joyride––as well as word of mouth. Shortly after the Yankees started buying kegs from RISE, players and staff from other teams started sampling the cold brew until the Yankees got a keg for the visiting team’s clubhouse. Now, the Red Sox, White Sox, Orioles, and Mets are among the teams that buy cold brew from RISE, Gyeski says.

Another opportunity exists for distributors. Joyride distributes and manages kegs for all its clients, offering its own coffee as well as Starbucks and other brands, but RISE and other companies depend on distributors to deliver their products.

Despite heavy competition, the presence of established players doesn’t have to be a deterrent, as offices may start buying numerous brands of coffee on tap when the trend picks up, the same way bars feature a variety of craft beers and chain brands. “I don’t think there’s any reason not to have many brands on tap in different offices,” Gyeski says. “I don’t really think it’s an either or situation.”

The future of cold brew

Beverage industry insiders suggest cold brew mashups will be the next phase of the cold brew craze. That means combining cold brew with a health element––protein, antioxidants, vitamins––or with other beverages. Cold brew has been paired with lemonade and tea, among other drinks.

He shared these insights about the future of cold brew varieties:

Bomani Cold Buzz will soon launch an alcohol-infused cold brew that uses the same fermented sugar alcohol found in the wildly popular spiked seltzers. The company was founded last year by Californians Kai Drewry, Sam Madani, and Amin Anjedani. None of them had any experience with beverages.

To start their company, they consulted with scientists to create the drink and distributors to build plans for getting their product in stores. They introduced the product at a launch party in February in New York and, after receiving higher demand than anticipated, moved the expected launch of the beverage to this fall. They intend to sell Bomani Cold Buzz in two or three markets at first.

Drewry, Madani and Anjedani have long been drinking cold brew while they work. By mixing it with alcohol, they believe people will want it for happy hour, too.